The High Price I Had To Pay Trailer

When you’re busted by the FEDS, automatically the odds are stacked against you! With a 95% conviction rate, very few are able to escape the wrath of the government. Due to hefty penalties and strict sentencing laws, over 220,000 Americans are serving time in federal prison. Shockingly, in recent years, a drastic increase of these offenders are women!

The High Price I Had To Pay Book Series  is an action packed, true-crime series based on the lives of women serving hefty sentences in federal prison. Written as cautionary tales, these memoirs expose readers to the real-life circumstances, and the choices these women made, that led to their incarceration. As each story unfolds, readers are privy to the startling details of what happens behind the scenes in the U.S. judicial system, exposing who gets prosecuted and who does not and the injustice of sentencing disparities.

Unique in nature, each captivating mini-book sheds light on the true faces of the women serving time behind bars and the detriment of mass incarceration. The jaw dropping details will cause you to think. Does the U.S. judicial system represent justice for all?

The High Price I Had To Pay 1  is a captivating real-life story that reveals another aspect of the inside fraud perpetrated by Lehman executives that has yet to be told!

This illuminating synopsis by author Jamila T. Davis, who is currently serving a 12 1/2 year sentence in federal prison for bank fraud, is shared from a unique stand point. Davis was labeled by Lehman attorneys as the 25 year old mastermind who devised an elaborate mortgage scheme that defrauded their bank of 22 million dollars. Her shocking story captures the inside tricks of Wall Street elite and takes you up-close and personal into a world driven by greed and power.

Davis’ story will leave you amazed and make you think. Have savvy Wall Street executives, such as Richard Fuld, been able to out smart the world? And while these executives escape unpunished, is it fair that “small fries,” like Davis, are left to do big time? 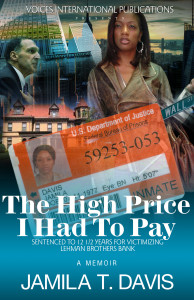 The High Price I Had To Pay 2 is a cautionary tale based on the life of Michelle Miles, a 21 year old, African American woman, who tried her hand in the drug game as a means to escape poverty. Joining the notorious “Burrell Organization,” run by her boyfriend, overnight Miles went from “rags-to-riches.” All was well until the FEDS got wind of the operation. With the help of informants, the Burrell empire swiftly crumbled and the key players were arrested, including Miles who was sentenced to 30 years in federal prison.

Miles’ story will leave you shocked about the rules of prosecution for drug offenders in the U.S. judicial system and make you think. Should a first time, non-violent offender receive a thirty year sentence? 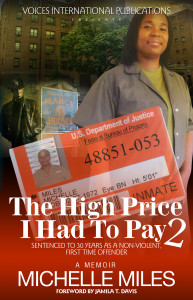 President Obama commuted the sentences of 58 inmates Thursday as part of his ongoing initiative to release federal prisoners who have received severe mandatory sentences for non-violent drug offenses.

The High Price I Had To Pay 3  is an enthralling true story about the life of Gwendolyn Hemphill, a 73 year old woman currently serving a 11 year sentence in federal prison.

Rising from humble beginnings and overcoming barriers of racism and poverty, Hemphill climbed to the top of the political ladder landing a respected position in the White House, under the Carter Administration. For decades, she vigorously served as a liaison who provided substantial contributions to her community, making waves in the world of Washington D.C. politics. Despite her accomplishments and her stellar career, one bad decision landed Hemphill a decade plus sentence as a first time, non-violent offender.

This story will leave you questioning is there mercy and equality for all citizens in the U.S. judicial system? And, it will make you think: Should a senior citizen with a stellar past serve a decade plus sentence as a first time, non-violent offender? 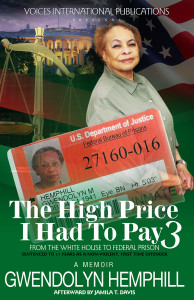 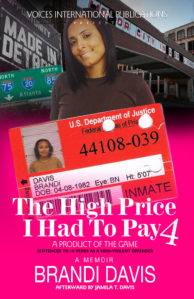